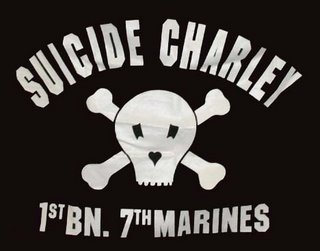 On 24 October 1942, the 1st Marine Division was occupying a defensive position around Henderson Field on Guadalcanal. The 1st Battalion 7th Marines, commanded by LtCol Lewis B “Chesty” Puller helped form this line.  “C” Company was flanked by “B” Company on the right and “A” Company on the left.

At approximately ten pm on 24 October 1942, the Japanese launched a major offensive, throwing three regiments and part of a brigade against the battle-weary disease ridden Marines. Charley Company received the brunt of the Japanese attack.  The morning of 25 October found the defensive line of the 1st Marine Division still intact.  The Japanese attack had been repelled.

Later that morning, a flag appeared over the “C” Company position. It consisted of white Japanese parachute material with a skull and crossbones crudely painted on it and inscribed with the word 1st Battalion, 7th Marines “Suicide Charley”.  The flag continued to appear throughout the hard-fought battle for Guadalcanal.

The “Suicide Charley” flag was not seen again until the battle for Peleliu.  During one particular phase of that bloody battle, a replica of the original appeared briefly to inspire the tired Marines to victory.