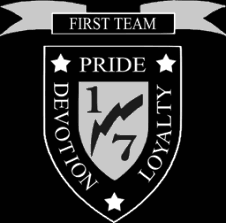 The history of 1st Battalion, 7th Marines began on 1 April 1921 in San Diego, California. In September 1924, the battalion was deactivated with its personnel being absorbed by the newly organized 4th Marine Regiment. For the next twenty years 1st Battalion, 7th Marines was activated, re-designated, and disbanded on numerous occasions until being reborn on 1 January 1941.

Just over a year after its rebirth the battalion boarded ships for the Pacific Theater and World War II, where they saw their first action of the war at Guadalcanal. Under the leadership of the Battalion Commander, Lieutenant Colonel Lewis B. “Chesty” Puller, the Battalion distinguished themselves many times over for valor and bravery as they valiantly held their positions against the onslaught of a regiment of seasoned Japanese attackers.

It was also during this campaign that the legendary Sergeant “Manila John” Basilone became the first enlisted man in World War II to be awarded the Medal of Honor. Throughout the remainder of the war, the “First Team” distinguished themselves during many different campaigns, including Pelilieu and Okinawa. Finally, the Battalion deployed to North China for occupation duty at the end of the war.

Following the occupation duty, the “First of the Seventh” was sent to Camp Pendleton, California where they were deactivated on 5 March 1947.

However, in response to the Communist aggression in Korea, the Battalion was again called into action. On 21 September 1950, 1st Battalion, 7th Marines made an amphibious landing at Inchon, Korea. Once more the “First Team” distinguished themselves in the battle as they took part in operations such as HOOK, RENO, and VEGAS, as well as fighting their way to and from the Chosin Reservoir.

It was during the Korean Conflict that such names as First Lieutenant Frank Mitchell, Staff Sergeant Archie Van Winkle, and Lieutenant Colonel Raymond C. Davis became part of Marine Corps history as each were awarded the Medal of Honor.

Following the cessation of hostilities in Korea and through 1965, 1st Battalion, 7th Marines spent time both in Camp Pendleton and Okinawa while maintaining its combat readiness.

In August 1965, the Battalion was once again called to service, this time in the Republic of Vietnam. For the next five years, the “First Team” participated in numerous operations such as STARLIGHT, PIRANHA and OKLAHOMA HILLS. During these operations and many others, the Battalion was honored repeatedly, earning the Presidential Unit Citation Streamer four times and the Meritorious Unit Commendation Streamer three times.

1st Battalion, 7th Marines was the first unit to man defensive positions in Saudi Arabia during Operation DESERT SHIELD in August of 1990. The unit was an integral member of Task Force Ripper. As DESERT SHIELD became DESERT STORM, 1st Battalion, 7th Marines participated in the diagonal thrust into the heart of Kuwait City, spearheading the liberation of Kuwait from Iraq. The Battalion redeployed to Twentynine Palms, California in March of 1991.

On 24 April 1993, 1st Battalion, 7th Marines turned over their mission and area of operations in Mogadishu to the 10th Baluch Battalion and redeployed to Twentynine Palms.

In January 2003, the Battalion was once again called into action for Operation ENDURING FREEDOM and consequently Operation IRAQI FREEDOM. On 18 March 2003, 1st Battalion, 7th Marines crossed the Iraqi border from Kuwait on their march toward Baghdad. The Battalion saw significant combat action along the way to and in the streets of the Iraqi capital. On 23 April, the Battalion turned over control of their sector to the US Army and took up positions in the holy city of An Najaf. After countless extensions, 1st Battalion, 7th Marines redeployed to Twentynine Palms on 5 October 2003.

During the Battalion regeneration phase, the Battalion demonstrated exceptional creativity and organizational skill creating, developing and facilitating an extensive Security and Stability (SASO) training package. This training evolution was implemented in preparation for deployment to Iraq in support of Operation IRAQI FREEDOM II.

In August 2004, 1st Battalion, 7th Marines deployed to Western Iraq in support of Operation IRAQI FREEDOM II. There the Battalion conducted security operations in the cities and roadways along the Euphrates River and Syrian boarder to include Husaybah, Karabilah, Sadah, Ubaydi, Al Qaim, Haditha, Hit and Haqlania. Involved in combat operations on a daily basis, the Battalion conducted mounted and dismounted urban patrols, cordon and knocks, Main Supply Route (MSR) security, sweep operations, and border security to clear the Battalion’s Area of Operation (AO) of enemy insurgents and provide stable conditions for the continued development of a legitimate Iraqi government.

In March 2005, the Battalion redeployed to Twentynine Palms and immediately began 10 months of intensive training in preparation for their return to Iraq in support of Operation IRAQI FREEDOM 05-07.

From February through September 2006, 1st Battalion, 7th Marines deployed to the Al Qaim Region in Western Iraq. During this tour, the Marines of the “First Team” enjoyed unprecedented success in battling the counterinsurgency and establishing legitimate civilian authority. The Battalion occupied 15 Platoon and Company battle positions which controlled over 5,000 square miles in the Western Euphrates River Valley. Each platoon was partnered with an Iraqi Army Platoon and members of the local constabulary. During the deployment, 1st Battalion, 7th Marines re-established a non-existent Iraqi Police Force to an end-strength of over 1,300 new officers and five police stations. Local Iraqi civil leaders were fully engaged by the Battalion leadership at all levels which yielded tremendous impact on security throughout the Al Qaim region and in so doing, created the model for Dispersed Operations throughout the Iraq theater.

From September 2006-August 2007, 1st Battalion, 7th Marines conducted a comprehensive training cycle on a compressed timeline by executing five Battalion-level field exercises and Mojave Viper. These events prepared the Battalion for the next deployment to the Western Euphrates River Valley.

In August 2007, the “First Team” deployed to Hit, Iraq in support of Operation IRAQI FREEDOM 07.2. The Battalion was partnered with two Iraqi Army Battalions, two Iraqi Police District Headquarters, and five Iraqi Police Stations and continued its fight against the insurgency by conducting raids, desert interdiction operations, and cache searches. Not only did the Battalion achieve great success by detaining over 100 insurgents and locating many weapons caches, including some on the islands in the Euphrates, the “First Team” also set the standard by transitioning many of the cities back over to Iraqi control. This progressive approach toward counterinsurgency operations empowered the local government and security forces to “police their own” and facilitated force protection measures for Coalition Forces. In March 2008 the Battalion re-deployed back to Marine Corps Air Ground Combat Center, Twentynine Palms.

In April 2008, the Battalion began 10 months of intensive training in preparation for their return to Iraq in support of Operation IRAQI FREEDOM 09.1.