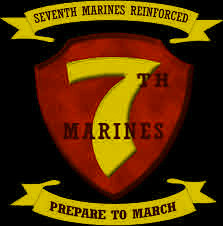 7th Marines was formed at Philadelphia on 14 August 1917 during the World War One, the 7th Marine Regiment immediately deployed to Cuba for two years. They were deactivated in the demobilization that followed the war. When the Marine Corps was once again called upon to provide peacekeepers in the Caribbean (1933), elements of the Regiment were reactivated and deployed on Naval ships off the Cuban coast. At the end of the crisis, 7th Marines was once again deactivated.

With the cloud of World War II on the horizon, the nation expanded the size of the Corps and on the first of January 1941, the Seventh Marine Regiment was reactivated in Guantanamo Bay, Cuba and was assigned to the First Marine Brigade; The Regiment moved to what is today Camp Lejeune, North Carolina. On the second of April 1942, the Regiment embarked for the Pacific to reinforce units already there to stem the Japanese march towards Australia. On September 18, 1942 after training in jungle warfare in the Samoa Islands, the Regiment landed in the Solomon Islands on Guadalcanal. For four long months the Regiment relentlessly attacked the Japanese defenders and repulsed their Banzai charges and suicidal attacks. In a hundred fights the Regiment earned a reputation for courage and daring. On Guadalcanal the heroism of Medal of Honor winners; Manila John Basilone, Mitchell Paige and Navy Cross winner Chesty Puller, represented the actions of the Marines of the 7th Marine Regiment.

Arriving in Australia in January 1943, the vast majority of the Regiment suffered from malaria, wounds, or just plain fatigue; but they had accomplished their mission. Australia was secure and a grateful population gave them a tumultuous welcome. The Regiment went to Australia not for liberty but to train and refit for the coming battles.

Again and again the Regiment was called upon to storm the Japanese held Islands in the Pacific. The Seventh Marine Regiment fought in such places as Eastern New Guinea, New Britain, Bloody Peleliu, and the Island Fortress of Okinawa. From Gualdacanal to Okinawa the Regiment had written a history of courage and ferocity in combat. In the years after the war, the Regiment continued to serve on far off shores, occupying China and disarming the Japanese troops still stationed in that country. At the same time they were ordered to keep the peace in a China torn by Civil War. Upon returning from China in 1947, the Regiment was deactivated yet again.

On 17 August 1950, the Regiment was reactivated, and on 21 September 1950 the Regiment landed as part of the First Marine Division. In General Macarthur’s brilliant stroke to stem the North Korean tide at Inchon, South Korea. The Marines of the Regiment fought in Korea with the same ferocity and courage that their predecessors had shown on the battlefields of World War II. From Inchon to the Yalu, at The Frozen Chosin Reservoir an in the long defense of South Korea until the armistice. There, marines of the regiment wrote further glorious chapters in their unit’s history. The Korean War, however, was only the prelude to the long Cold War period that would hold the World on the brink of Nuclear confrontation for the next Forty years.

In fall of 1962, substantial parts of the Regiment embarked for the Caribbean and possible action in Cuba, aimed at forcing the removal of Soviet Nuclear Missiles pointed at the heart of America. As the Crisis subsided, The Seventh Marines returned to Camp Pendleton, California.

In 1965, in another Asian land, the Regiment went into action against the foes of Freedom. This time the battleground was Vietnam. On thousands of squad sized patrols, in scores of Battalion and Regimental sized operations, and in fierce Division sized battles, such as the TET Offensive, the Marines of the Regiment proved that they were worthy successors to those who had gone before them. Whether in armed action against the foe, or in civic action with the local populace, the Marines of the Regiment performed magnificently. Through the long course of the War in Vietnam, until they left as part of the American withdrawal, the Marines and Sailors of 7th Marines never wavered from their duty. As the Regiment sailed for the United States in September of 1970, the members of the Regiment were proud of their role fighting against Communist Aggression

During the 1970’s and 1980’s the Leathernecks of 7th Marines trained in every clime and place preparing for the moment when they would once again face the foes of Freedom. In August of 1990, shortly after shifting the home of the Regimental colors from Camp Pendleton, California to the Marine Corps Air Ground Combat Center, 29 Palms, California, the Marines and Sailors of the Regiment deployed to Saudi Arabia to stem Iraqi aggression against its neighbors. Manning the “Line In The Sand”, the Regiment faced the Iraqi invaders. For the attack into Kuwait, the Regiment fought with skill and ferocity, overwhelming the enemy. After their Victory they returned to 29 Palms.

In August of 1991, in recognition of the unique organizational changes that occurred in Seventh Marines, and with the addition of 3rd LAI Battalion, 1st Tank Battalion and Delta Company 3rd AA Battalion, Seventh Marine Regiment became Regimental Combat Team Seven.

In December 1992, RCT-7 deployed on Operation Restore Hope to relieve famine and return order to Somalia. Over a five month period the Marines and Sailors paid in blood as they worked tirelessly to alleviate the suffering of the Somalian people and to restore order to their Ravaged Nation.

On 13 August 1993, on the eve of the Regiment’s 76th anniversary, the Regiment formally marked the return to its original designation by changing its name from Regimental Combat Team 7 to 7th Marines (Reinforced).

On 8 October 1994 the action cycle began again for 7th Marines (Reinforced) when a crisis situation in Southwest Asia forced the Decision to terminate CAX 1/2-95 in order to prepare for a MPF deployment and link up with MPSRON-2. This high paced contingency operation was titled Vigilant Warrior. Although the National Command Authority did not give the order to deploy the entire Regiment, its Advanced Elements moved into the Gulf.